2017 has without a doubt been the best year I’ve experienced to date.

A very big part of it is down to what we’ve all created through this site and the many parties associated with it. What feels like not so long ago, we were lucky enough to host another Future People night over at Buffalo, and there was a moment when I joined the dancefloor as Matt took the reigns and I realised how lucky I was that I knew at least 80% of the faces on the dancefloor. I’m aware that Buffalo isnt exactly a big space so even if it was only 40 people there, that feeling was still something special and another memory from this year that’ll stay with me probably forever.

It’s fucking sick to be able to dance with you guys as we play our obscure world music in between all the disco.

Future People have a new home from November. 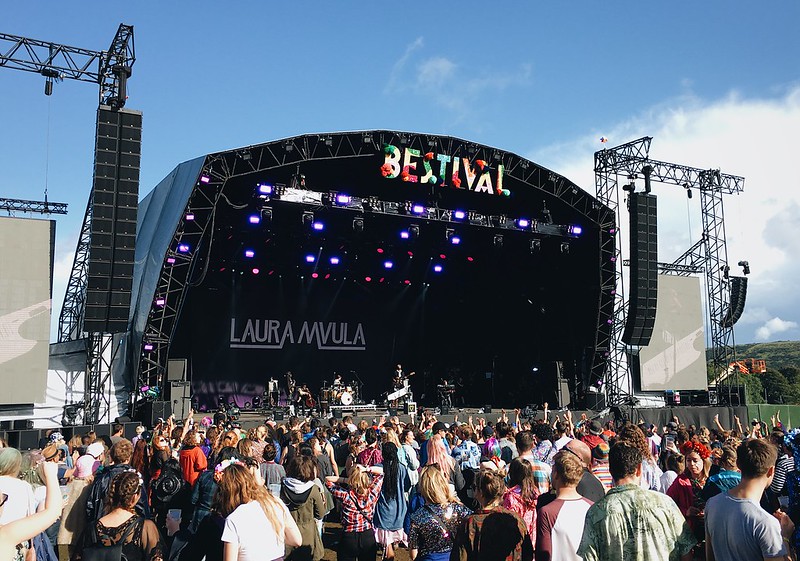 Instead you might recall I attended two festivals in July and August and wrote about them respectively. I did manage to make it to Bestival in September and this time I wasnt so quick off the mark to write about my experience there… mainly because I wrote the Farr post a week or two after the event while it was still fairly fresh and Boomtown I wrote while I was actually there.

This time I wanted to digest everything that took place and actually reflect a bit on it all.

I mean it was completely different and an experience I cant even really begin to compare to the others, let alone Zone F at Reading Festival 2010 (remember that? lol). I was with a completely different bunch, nobody from the lo key family was there, it was a more commercially driven festival compared to the previous two with it being moved to a different location from the Isle of Wight site (apparently 2016 was terrible) and I was completely sideswiped by a person I wasn’t really expecting to meet amongst the mud, rain and copious amounts of… carnage. 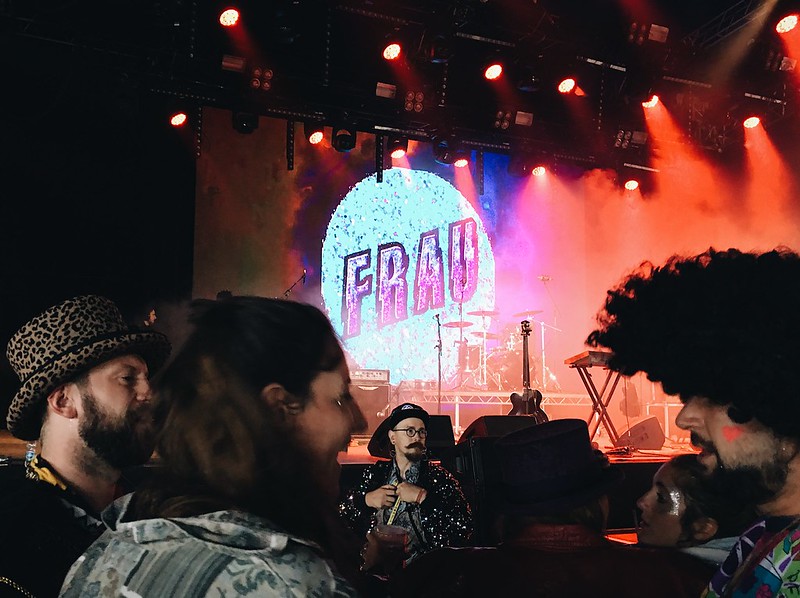 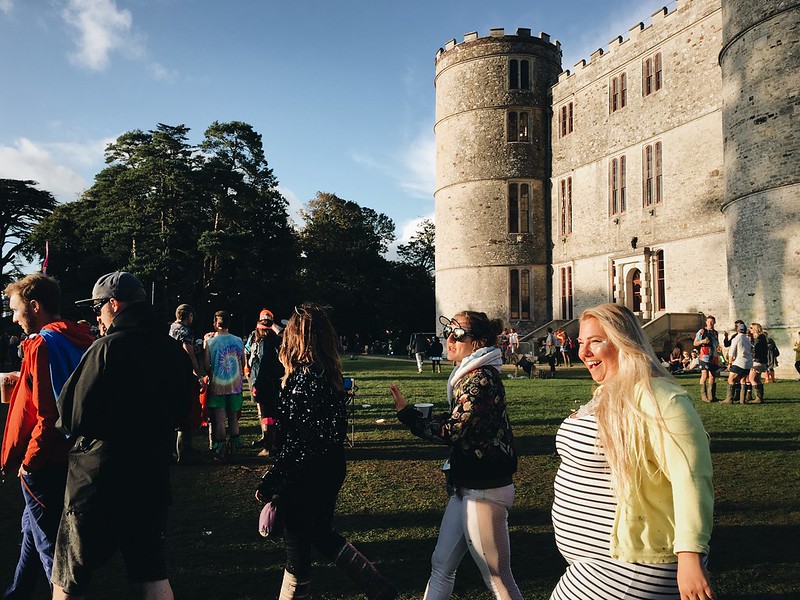 I was asked earlier in the year if I’d like to be a cycling marshall for Velo Domestique’s Brother’s In the Wild bike ride that my friend Dan Armstrong was arranging. Dan is the owner of velodom and we go back quite a few years now since he started the Velo Sur Mer fixed gear bicycle races here in Bournemouth. I’ll tell you more about him soon but I couldn’t attend the Brother’s Cycle event but I did manage to go to Jimmy’s Ice Coffee’s first Rideclub event with Dan and the rest of the crew and was offered to do the same for the Bike To Bestival cause… of course I said yes.

Now I know I said I was meant to be in Amsterdam around the same time as Bestival, and I’ve always been into cycling etc etc, so there really are worse problems in the world to have. The plan was to do this ting with the velo crew and leave everyone on the Friday to get ready and packed for the flight out to Dam… I have no idea why I thought that would be a good idea, but maybe I’m crazy, idk. Blessing in disguise I guess because I met some incredible people and even got to the inner circle of Dan and Jenny’s friendship group – I’ve not mentioned Jenny yet but her and I both know she’s the real brains behind the velodom operation – Hey Jenny 😉

That was nice in itself because we’re finally at a place with this lo key project that we know a good amount of Bournemouth’s art scene. This is something I feel very passionate about towards and it shows considering that I’m not hung up about missing a close friend’s stag do – I’ll make it up to him at the wedding reception though and get him completely shit faced so we good.

Rich, Lisa Perks, Max from Patas Ariba, The lovely hip-hop yoga girls and their red arrows, Roland, Annie, Mike, Layla, Olly, Kairon or Kieron (idk how to spelt your name bro lol) and Lisa… Lisa, Lisa… – it was a pleasure meeting and partying with you dudes for the weekend.

All the old faces were there too – Jacob (for one day lol), Felix, Yasemin, Chris & Kirsty, Leo, Jason et al… I even bumped into Case Spakes Aaron a couple of times. 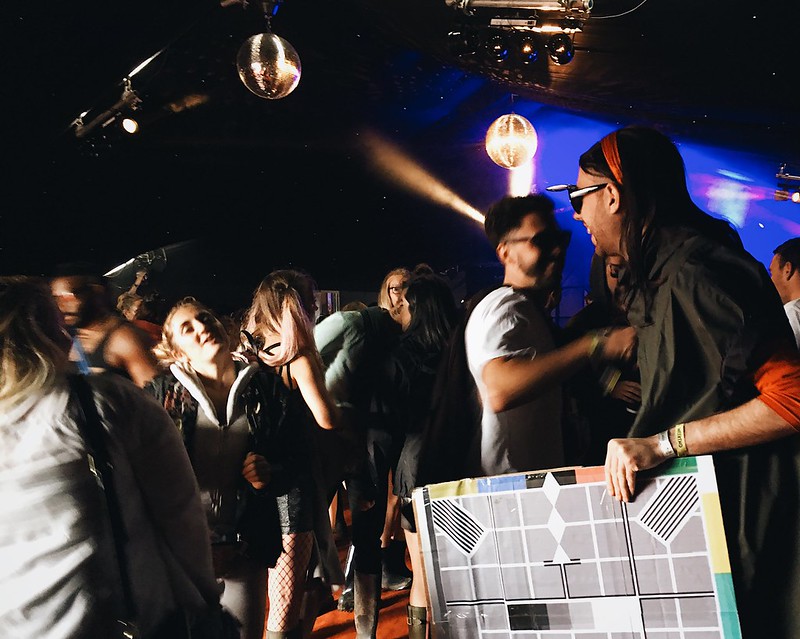 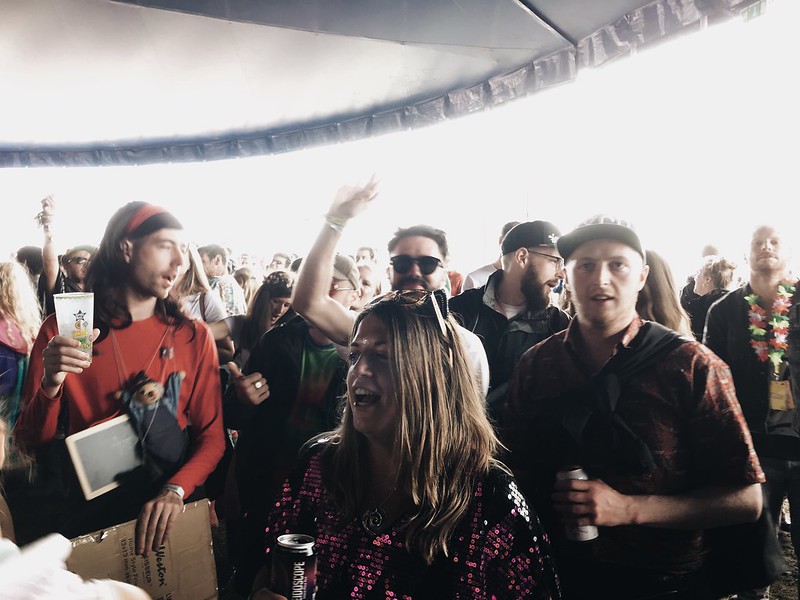 The Bike to Bestival thing was a big collaboration with the Ellen MacArthur Cancer Trust and encouraged festival goers to cycle to the new location at Lulworth Estate from the cafe located in Southbourne. The premise was that your ticket was free as long as you raised £150 for the cause, whichever way you wished.  In the end nearly 100 participants met at the cafe on the morning of the 7th September and it couldn’t have gone any better. 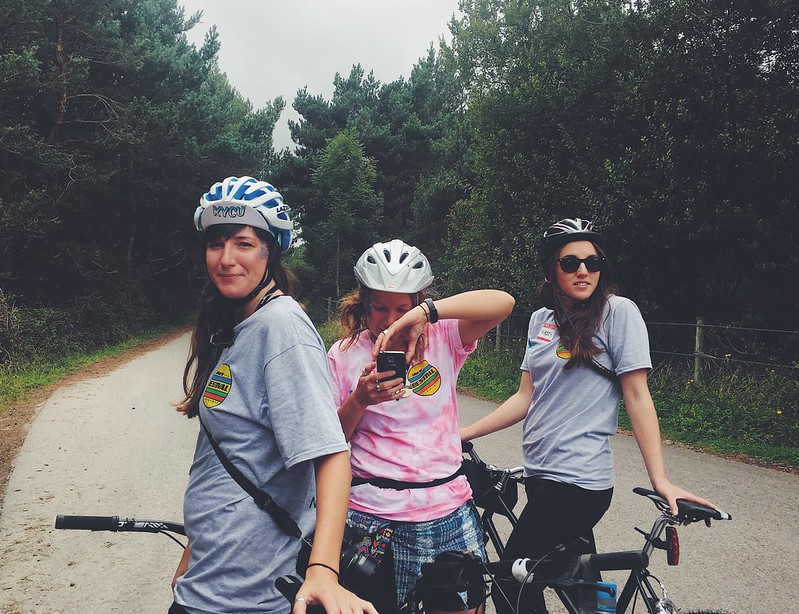 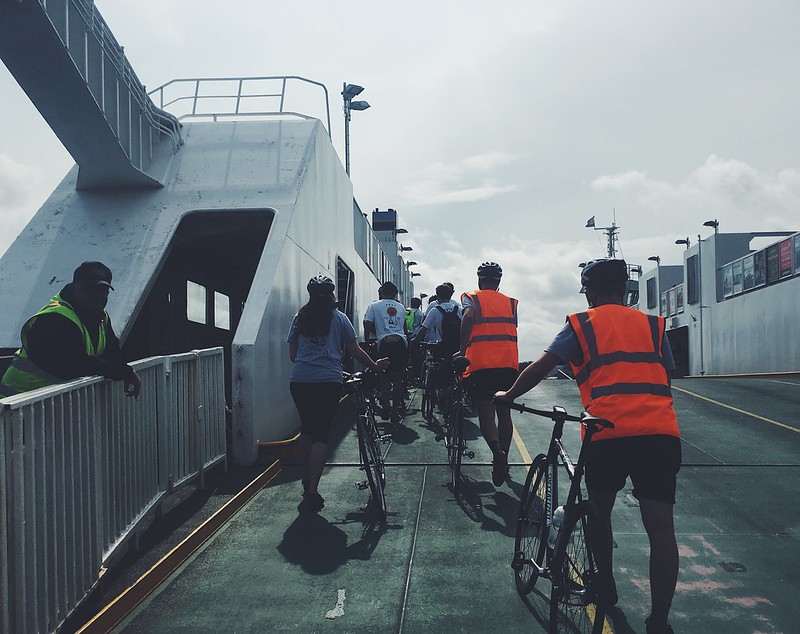 Dan paid a heartfelt homage to all the marshalls on the day and I’d like to second that it really went without a hitch. We all managed to guide the flock like the cool fixie sheppards that we are over the 26ish miles without any real hassle – bar a punctured tyre or two. Everyone made it there and the weather held up too… briefly. 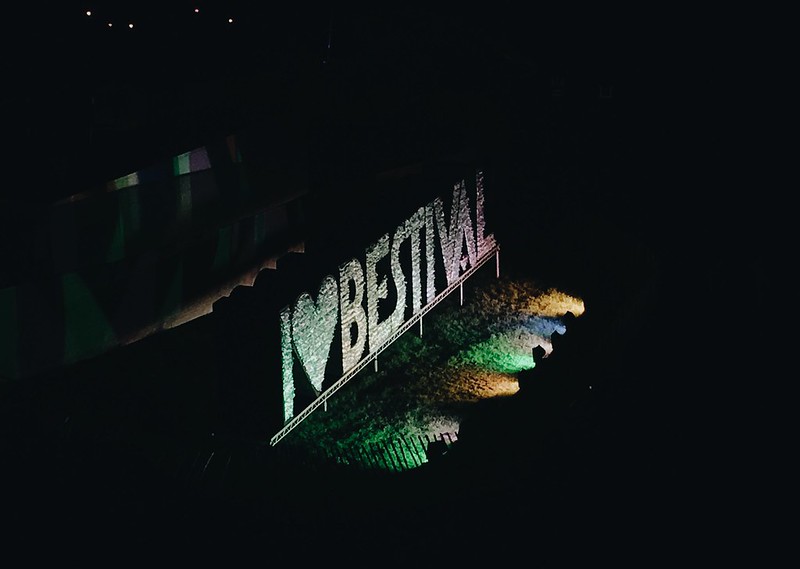 The rest of the festival consisted of much less cycling but there was a lot of struggling through mud and nearly slipping – some people actually slipped lol – Hey Annie… Matt Richards too as I was later informed by the man himself.

Going to a festival with a different group of people meant that I was also more open to experiencing new music. Partly good, partly bad. Good because I discovered a whole bunch of cool stuff from The Turbans, The Hypnotic Brass Band, The Dub Pistols and I also got to see old favourites Mr Bongo, Roots Manuva, Tribe Called Quest, The XX and even dragged Lisa to see Laura Mvula with me…

Bad because I missed acts like Medlar, Peggy Gou, Craig Charles and his manly Radio 2 voice, Loyle Carner 😦 There were many reasons for that though – I’m not saying that these new friends stopped me from going to the acts I wanted to see. I’m saying that these new bunch of faces were so much fun that I completely forgot that I kind of had a little agenda planned out in my head.. They were so fun that I forgot all about it, for the most part lol. But then again I’m pretty loose so it’s not really hard to distract me… hard to keep my attention though ey Lisa?! There was also a shit load of mud and the stages were unexpectedly closed every so often..

Another act I did make sure I went and saw were my buddies, Lloyd and Jack from Get Satisfied. They took over the entire Bollywood stage from 8pm on the Sunday and it was one big party until the early hours of the morning to see the festival out quite nicely. Big shout to those guys for being part of that as I know Lloyd works hard to keep the underground scene in Bournemouth going strong by bringing big names down to the South Coast every, if not most, bank holidays. He’s also responsible for the whole Somerley Tea Party thing, but I’m sure I’ll be able to tell you more on that in future…

All in all I could probably write another thousand words on the things that happened in between – the Samsung tower thing, bumping into Rosie in those woods, the lady in the mobility scooter that got stuck from all the mud and straw and then realising that Rich was part of the crowd trying to get her through it but he was so fucked he kept falling over, the guy with the hat that had all the smoking accoutrements, that massive food tent with all the good food, Kendal & Co’s tent’s getting robbed, Adam taking care of evening antics as Jimmy’s little plot of land had it’s own after party and gathering of people, Sarah’s Dave helping me get my stuff into the festival site but it taking us 4 hours to actually get anything done… 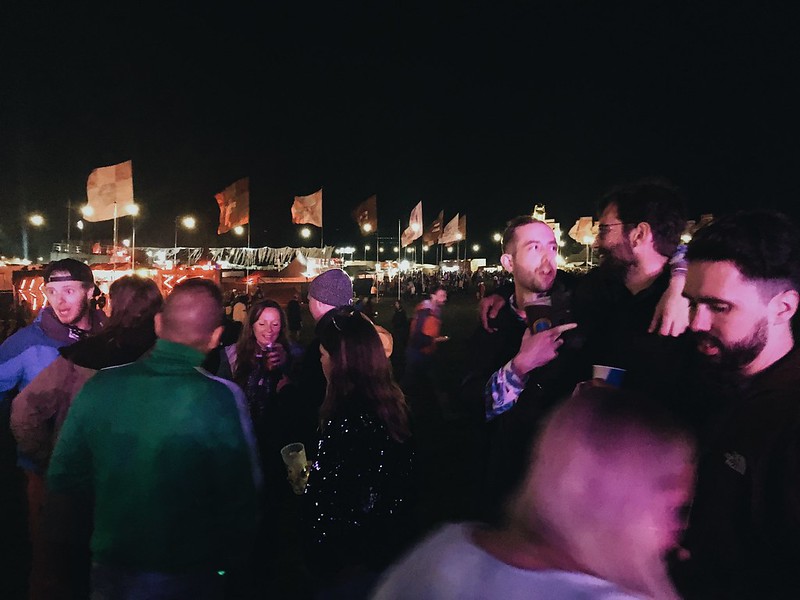 But, those moments are probably all best kept in the memories of those that were there. I will just say that it’s the first festival where I felt like everyone there was part of this greater community involved in promoting arts and music culture locally.

Lulworth is right on our doorstep, and maybe I’m new and naive to all of this but I really do think it’s important that all the collectives, artists, shop owners (especially the independent ones) and the twenty or so thousand of DJ’s living in Bournemouth get on board with supporting the event for 2018. There was a lot of marketing hype this time round, as I touched on this earlier, so next year we need to be lapping up all the opportunities Mr Rob Da Bank throws at us…

I think it’ll be important for our scene.

Till next time though. 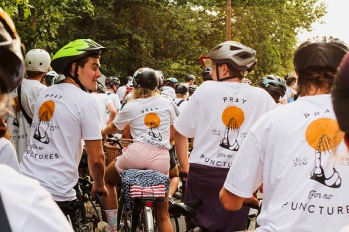 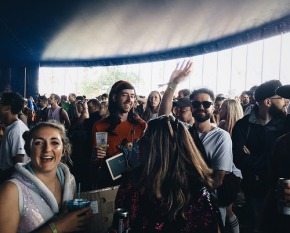 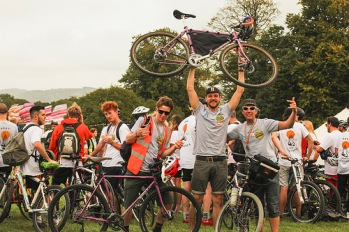 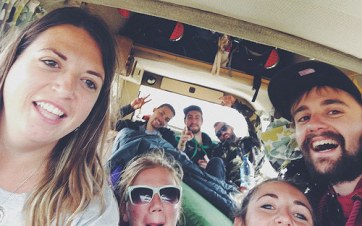 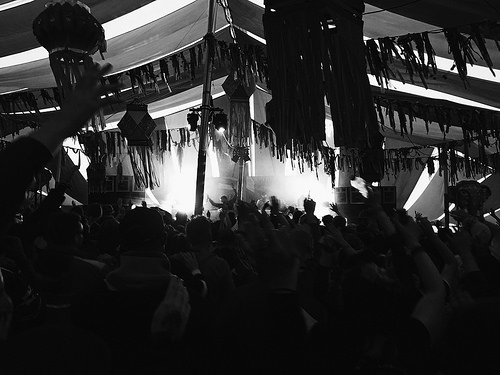 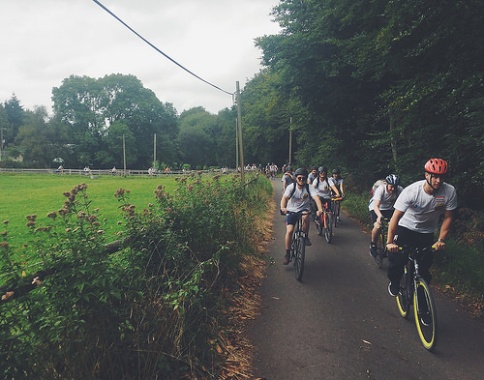 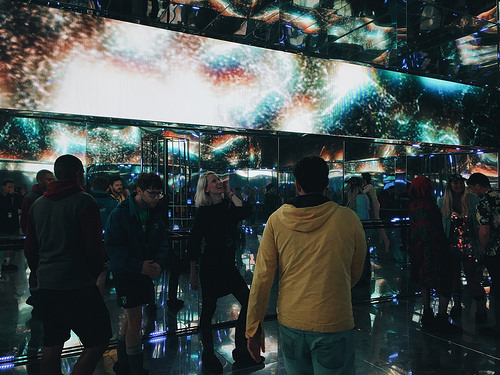 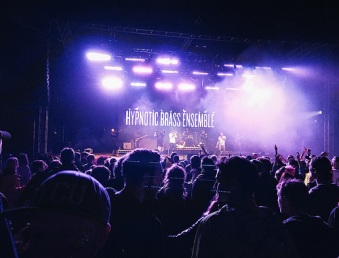