So Miche attended his first proper festival a few weeks ago, and what a fucking few days it was! 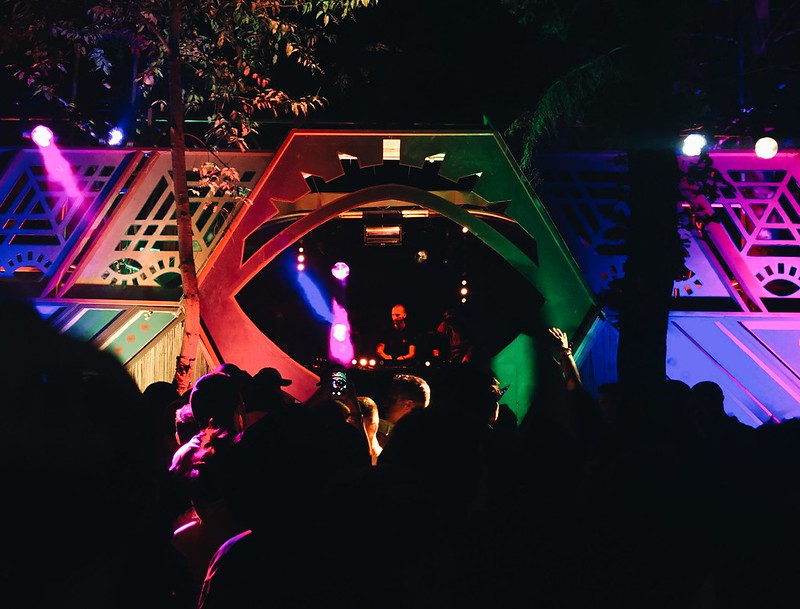 We initially heard about Farr festival last year when we met our Birmingham friend Ben Fisher. At that point (September 2016) we’d known the journey that we need to go on with the yougoodthing side of things – world music duo lmao – and the idea for lo key was well on it’s way. The intrigue about Farr was first built when Ben told me he was at the last edition and that Amsterdam’s Heist Recordings hosted their own stage. Michael was already well into his fanboy crush on them by that point and I’d already lost count on the amount of time’s he played the entire Heist back catalogue that he got himself into CCJ debt for. We were due a trip up for London to see Detroit Swindle later that month actually, and I’m not even kidding but that night at Egg, London when we did see them really cemented everything for us. I don’t mean to derail but that was an unforgetablle night and it was the first time I’d seen DJ’s maintain that level energy across 3 hours. I’d only known them for The Break Up or 64 Ways up to then so I really wasnt ready for the breadth of music they played on the evening. There was Bongo’s, Acid, Disco, Edits – alll of it – and even though I’ve since been to better nights, you really cant compare these moments where the DJ takes you on a mind bender. And like I say, after the whole thing we really decided that in order for us to really excel at this we were going to have to get our shit together! 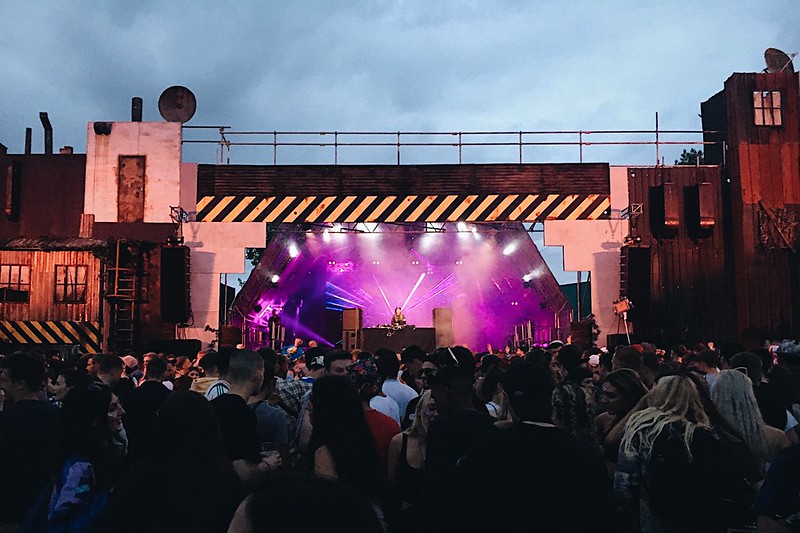 I’ve been to Reading, Wireless and Bournemouth Sevens (lol, is that even a proper festi?) in the past but back then I think I only really went (Especially, Reading) because my only friendship group were into the majority Indie acts you see on these line-ups. I mean yeah Justice played a wicked set at Reading 2008 and I did manage to see Cypress Hill, Travis Barker drum upside down and The Prodigy was hands down the craziest experience I’d had with music up to that point. I remember my mate Will Cook picking me up from the floor half way through the Mosh while Omen was blaring above us – ahhh.

It was pretty dope then when I found out there’s a festival catering specifically for the exact type of wunderground music from the balaeric global leftfield that I was into. And whilst I dont like researching things too much I did look into things and the idea of spending my time listening to the music I love, in a forest with my friends pretty much sold it to me. 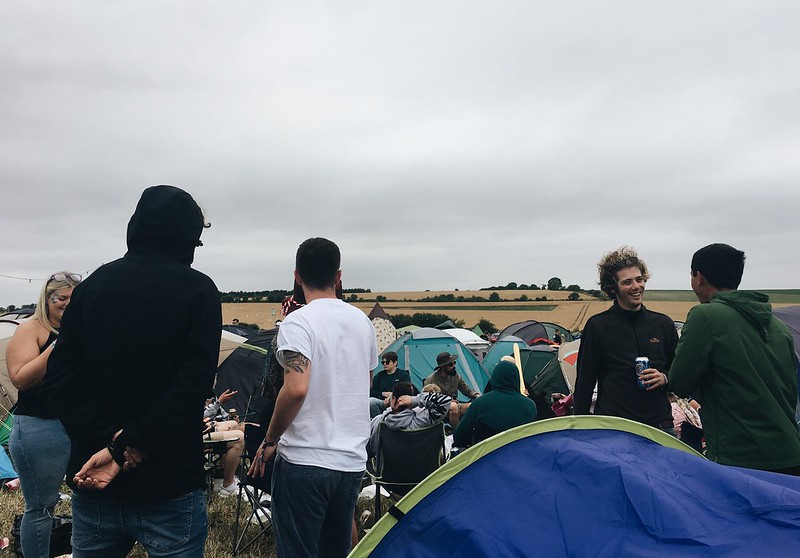 Now I was meant to go with my ex girlfriend (I think the yoga swayed it for her) but that didnt go as planned lol, so I thought I’d treat Miche to a little getaway so our bromance could flourish to the next level.

I’m pretty bloody unorganised when it comes to planning for big trips – you know pack on the night before, kinda blase, only to realise I hadnt really thought about what I’m going to eat when there or whether I might need a fucking camping chair… I should definitely get a camping chair! We met up with Dom and his lovely bunch of friends who were happy to take us into their campsite for the time we’d be there – we were all together at The Shack (one of the Farr stages) on the Friday seeing Kitt and the sun came out while he played this and the vibes were just perfect. 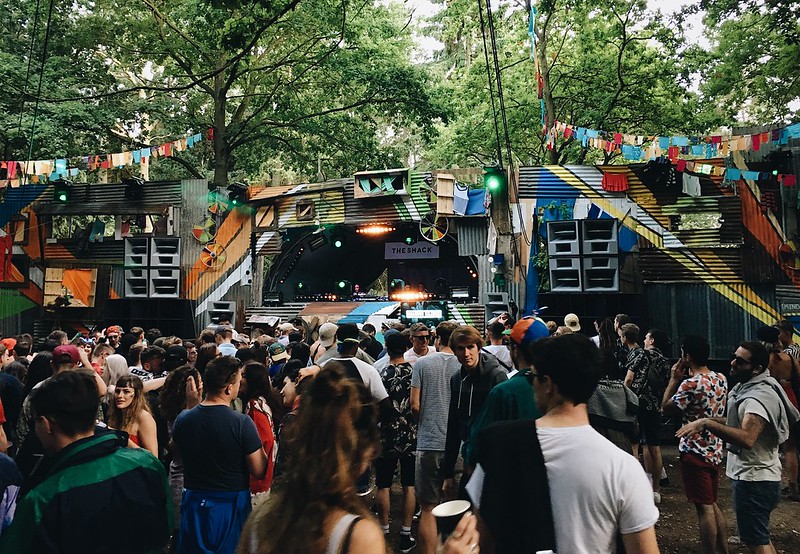 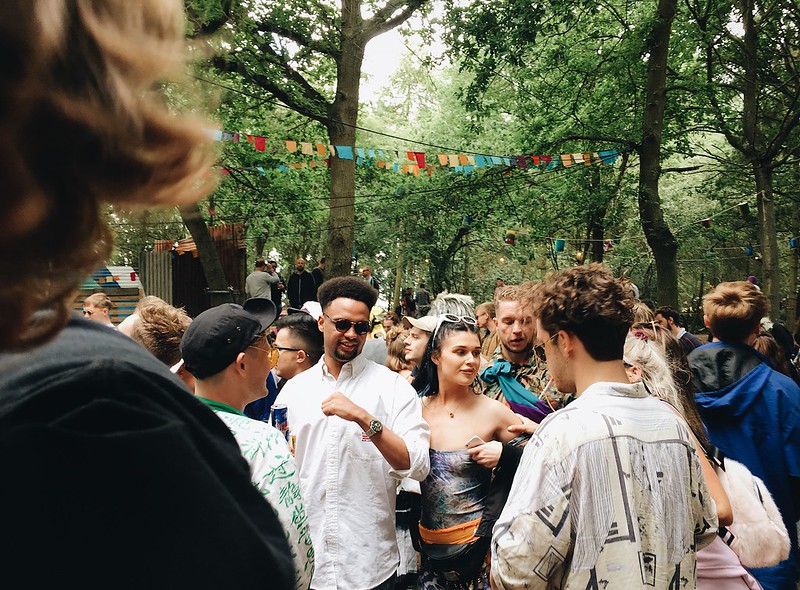 Dom’s a mega geek and I love that because recently the two of us have been talking alot about sound and it’s importance in nightclub or other general party environments. He runs a lighting business while also being heavily involved in music – his flavour darker and a bit more seshy! So of course when we were partying in the forest it’s quite hard not to notice that perhaps the bass was a bit too boomy as it was at the Hidden Palace. Lars form Detroit Swindle mentioned a few times that there was sound trouble on the night but I’m not too sure if that was the sound decibel limiter science things that ducked the volume as soon as it reached a certain level – that was a little unfortunate as it made me leave thinking that I wish I went and saw Leon Vynehall. Sound does that though, I mean we’re specifically looking to pitch our Future People night to a nightclub in Bournemouth that could really deliver the records we own in a beatiful way – I mean yes like I mentioned that was the whole ethos behind Plastic People but it’s 2017 and still I haevnt seen that been done round this ends. Back on topic though, sound trouble also tarnished by the hype that Detroit Swindle built up that night we saw them last September. Rumour has it that the bass bins at the Hidden Palace was actually custom built for Mr G’s live set on that stage the Saturday. Saw that too and yes it was pretty incredible – very little sound issues that time compared to the day before with the exception of Henry Wu playing Peace and Love by Phil Asher – another special moment! 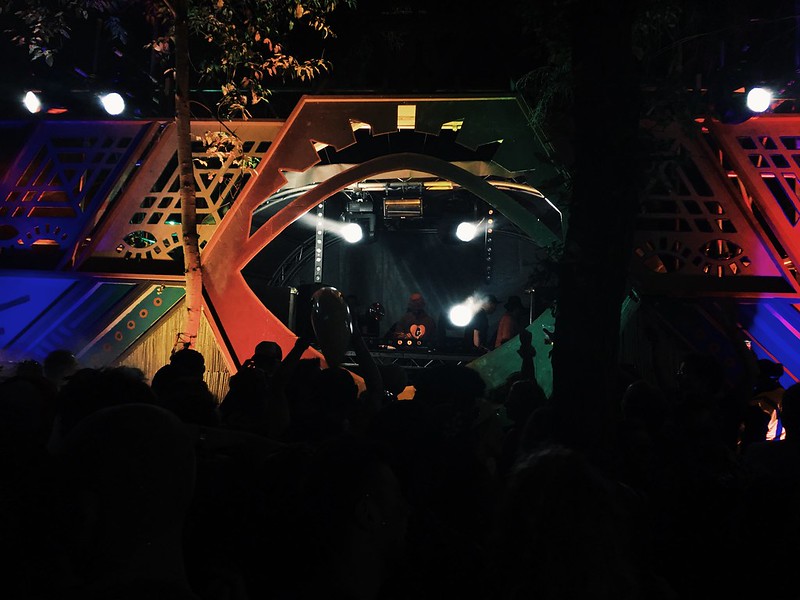 Most of our time over the weekend was spent in the brilliant corners tent. Yes my initial plan or expectation for this festival was to be surrounded by electronic goodness all weekend but then again I thought I’d strictly be a house DJ and look at me calling myself World Andries introducing Michael to Four Tet, Theo Parrish and Jeremy Underground. So yeah it’s pretty safe to say I really enjoyed just bumping around the little tepee looking hut to the lovely sounds coming out of the custom built Klipsh sound system in that delicately structured circle. And let me not start with how good looking the people in that tent were across the weekend – really tasteful salsa dancing going on all day, it was a real joy to swing my snake hips in there or even to watch the people floating around! There were special unannounced guests frequenting the tent throughout the weekend and one early morning at 01:30am we were hoping that Mr Floating Points would grace us with some lovely melodies – I wish I remembered though as I’m sure I fell asleep on the rug against the wall.

It was really nice and chill, by far my favourite stage/tent of the weekend. 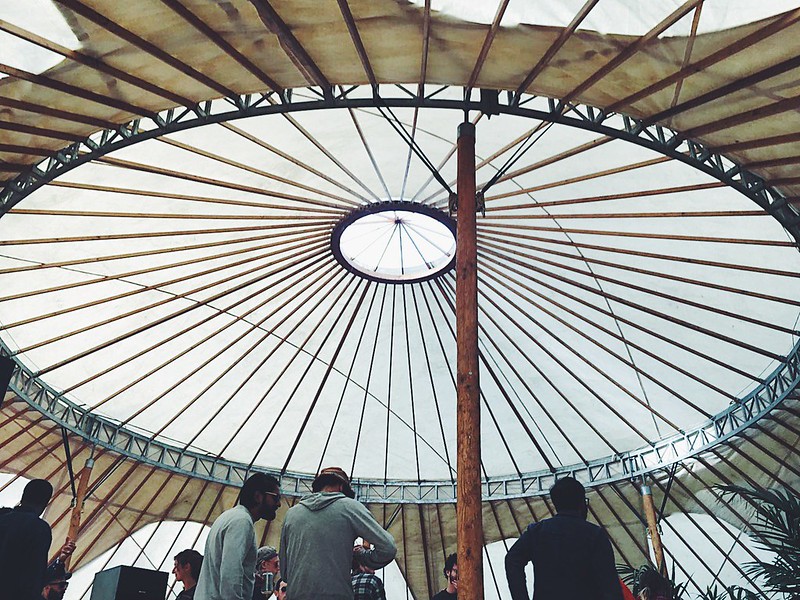 On the topic of Sam Shepperd – that for us was really the headline act of the weekend, and at the moment I’m struggling to think of anyone else on that line up that’s at the height of the powers the way that guy is. The real heads will be able to connect the dots and will be able to tell who our true inspirations are by reading and traipsing through this site…

Another one of those life defining moments, 10 hours of Theo Parrish a few days later and yeah… So there you go, my favourite act of the weekend. Again, the way they manage to maintain your attention throughout that amount of time is really something else – I’ve never more been inspired to try and emulate that myself, and I know Mike feels the same. 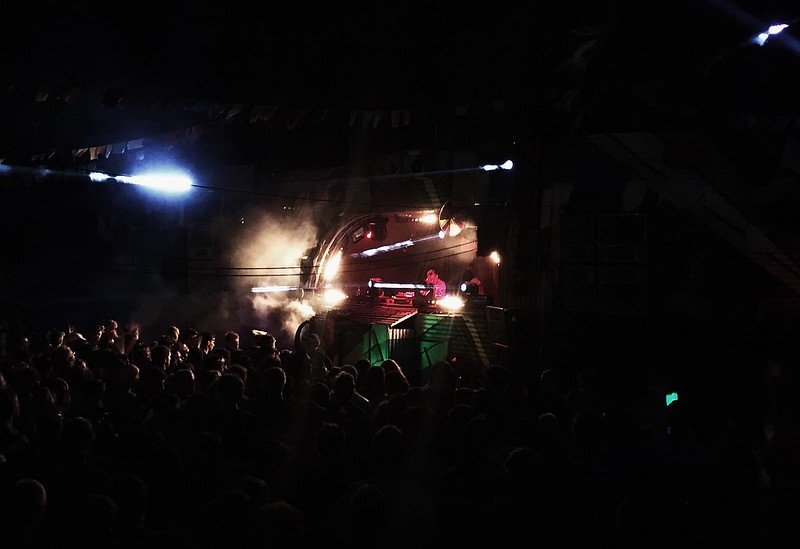 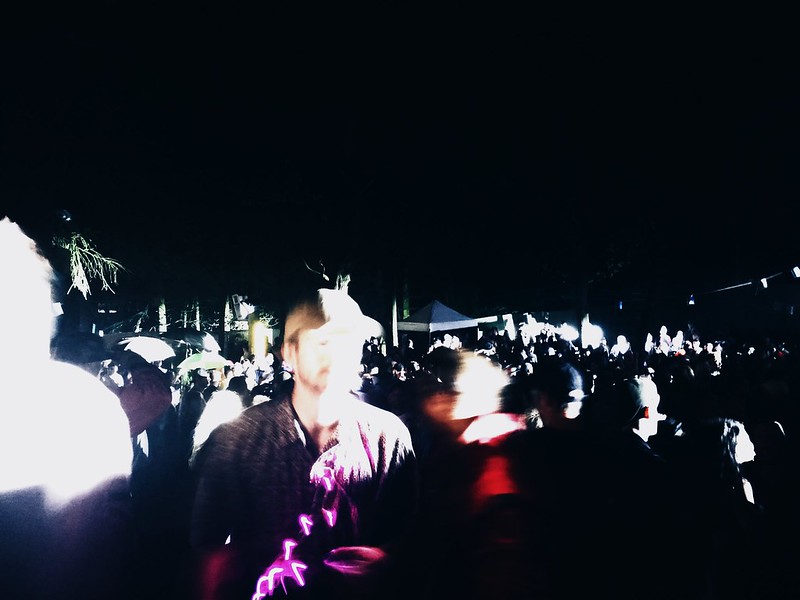 Quick pro’s and cons of Farr then?

I’m really struggling to find fault with it all to be honest. I mean I’m a pretty easy going guy when it comes to a walk of life I dont know all the much about and festival running is really something I have no desire to learn about all that much right about now as I type this. It was great. and 10/10 would consider going next year – it’s defintely more fun being on the other side when at these things though.

Tom, if you ever read this thanks for voting me 8th in your Best DJ in the World competition and thanks to the rest of the Farr crew for a great event. 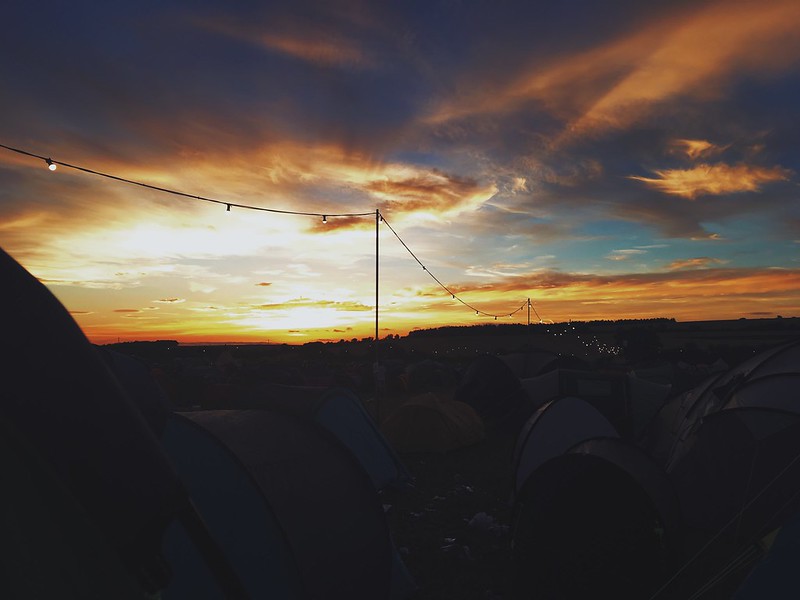